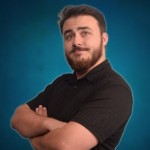 As a theme park junkie, I’ve always received a thrill from attending conventions. The crowds, lines, various attractions and ecstatic atmosphere from the attendees generate the same buzz I get from walking through the gates of my favourite themed worlds. RTX is one of those conventions.

This is my third year at RTX Sydney. I have always looked forward to this convention as it’s a great opportunity to rub shoulders with some of the internet’s best personalities and creators. As a creator myself it’s always inspiring to see people who have made a living out of a such a hard to accomplish market. The atmosphere of the event is always exciting and Rooster Teeth always do an incredible at making their events and panels lively and entertaining. Pricing wise, it’s relatively similar to the previous years.

We arrived promptly at nine o’clock in the morning on Saturday. We were thrilled to find that there were no queues leading out into Darling Harbour like last year and wandered up the main escalators to the beautiful International Convention Centre from Darling. It began raining as we arrived but this doesn’t matter as we’ll be inside soon, right? We reach the main entrance and were immediately hit with reality.

“General admission to your left, VIP to your right.”

This is the first of many segregated events at RTX Sydney. Unsurprisingly, general admission guests are made to walk outside. It’s raining and the ICC is an elegant cube that has barely any cover from the elements. We are ushered through the rain and finally make it inside after a short walk to arrive at our first line of the trip to receive our passes and wristbands. All a fairly seamless process so far, aside from the short rainy walk which I acknowledge would not have been intentional or an issue outside of the weather we unfortunately received.

From here we wandered into ‘Expo Hall Two’ via the escalators to join the crowd of people. I’m partial to waiting outside of events and theme parks before opening so this was no big deal. It was the usual for me; play a quick game on my phone, check time, repeat. A concerning issue was that there was really no line structure in this group which spanned probably about one-fifth the expo floor.

The only discernible line was for VIPs which formed in front of us. This is a theme throughout a majority of the convention in which VIPs and their benefits are kept in plain sight. I understand that it’s easy marketing, but I felt it generated more resentment among general admission guests more than anything else.

Once we were set free from the hoard of eager Rooster Teeth fans we hit the show floor to see if there were any exciting booths or unique experiences. Myself and my friend ‘Liam’ wondered aimlessly into the Dell-Alienware booth by accident but they provided us with an opportunity to try out Dell’s new ‘Mixed Reality Headset’. Don’t let the name fool you though, these are just VR headsets with a couple of cameras to “future-proof” them. They currently have no Mixed Reality features. There were multiple games featured in the demo but I settled on Super Hot VR which was a wild experience. Punching virtual people with fists of steel is always satisfying to say the least.

We were lucky to get that experience though, as later through the weekend we noticed there was a strong line for this experience upwards of an hour wait. Personally, I wouldn’t wait that long to get a glimpse of VR but for some people, I can the value in waiting if they haven’t tried it before or are possibly considering buying one of these headsets.

Excited by our VR experience we continued to scan the show-floor for more things to do as there was a couple hours until a panel we were interested in. However, we quickly discovered that there is basically no ‘show’ on the show floor. RTX 2017 featured Nintendo and Microsoft who were showing new technology and games such as ‘Breath of the Wild’ and ‘Halo Wars 2’. It gave you something to do in the downtime, but this year it was mostly just shopps with a couple of computers playing PUBG scattered around the floor. The game was usually used to show people how powerful their computers were or to let you interact with the latest RGB mouse and keyboard. However, I will give praise to Wacom. It was neat watching their artists utilise their tablets and devices to their fullest ability.

We ended grabbing a bite to eat after we found ourselves aimlessly walking around the floor hoping that something would jump out at us but the only thing that did was ‘International Paintball Group’ who are notorious for their spruiking.

The rest of the day seemed to breeze passed us. Aside from watching a couple of panels, there wasn’t much left for me to do. I sat around at the back of the floor with some friends until close watching the panels on Twitch. This sounds silly, but it beat having my legs deteriorate from standing around for several hours.

Sunday felt much more lively than Saturday. I had a couple of things scheduled into my day so it gave my day some proper structure. There was a VR panel which I felt was necessary to attend as VR can be tragically hilarious to watch live (and it totally was).

A surprise during this panel was an audience participation session where they invited guests to come up and play Super Hot VR in front of the stage. I put my hand up for this and was ushered into a line for a chance to win a Mixed Reality Headset. It was terrifying to play as it was so rushed and everything happened so quickly. The aim was to beat a high-score of 11 in their continuous play mode and I scored a humble score of 8. You were given two tries but I accidentally pushed a button which reset the game on my first try and this counted as a go.

One of the other events that day was meeting Bruce Greene and Adam Kovic using the only autograph code I received for the weekend. We managed to score a beautiful awkward family photo.

If both Saturday and Sunday had these ‘Meet & Greets’ I feel like it would greatly improve the negative space in people’s schedules. Just this simple addition improved my attitude towards the event because all the Rooster Teeth personalities are incredibly fun to meet.

Whilst I waited in line for an hour to get this beautiful photo, I had a clear view of the Let’s Play stage which gave me an opportunity to truly appreciate the content that was being provided. The Achievement Hunter team were showing the Yogscast crew around their world in Minecraft and then they just started blowing everything up. It was juvenile, but their commentary of the situation was hilarious and the crowd absolutely loved the experience.

All in all Sunday felt much more lively and full in terms of the overall experience. The additions to my schedule made it feel far for fulfilling. I had grown accustomed to what was actually on the show-floor and used to opportunity to look at potential future purchases. They had some good deals as the day died down in terms of hardware and video game memorabilia.

The event was fulfilling, but nothing beyond. I was satisfied with the overall weekend purely because Sunday was a standout. If both days were like Saturday, I would have been very disappointed and I think this is something to keep in mind if you’re attending with a single day pass. Obviously, the VIP ticket is going to provide a more fulfilling experience but the value of a ticket is purely derived from how much you expect to get out of it.

RTX still has a ways to go in becoming one of the elite’s in Australia like PAX or EB Expo in its hay-day, but I definitely think it has the base to create something truly spectacular.